One of the key elements of every data backup is the definition of the rotating scheme so the protection was guaranteed at least one day back. The best rotating scheme of data carriers is the one, which can guarantee data copies as long, extensive and varied as possible.

Data backup and its consecutive storage for more than one day are necessary.

Nevertheless the costs or time required for full everyday-backup can be impractical, especially for companies with huge amount of data. That’s why many users apply either differential or incremental backups on most of the workdays.

Full Backup – during full back up the selected files are backed-up and their Archive attribute is removed simultaneously. Attribute is instrumental to distinguish backed-up and non backed-up data. When the file content is changed, the Archive attribute is set again. Full backups are usually a pre-step before using Incremental and Differential backups, which help to save time necessary for backup performing. If the full backup is performed, it is enough to restore only this one backup for restoration of the original state.

Incremental Backup – during this type of backup only the files with built-up Archive attribute are backed-up and this attribute is deleted afterwards. Thus only the files that have been changed (or the ones with attribute Archive set manually since the last full backup) are backed-up. The backup is significantly shorter than the full backup, that’s why it is usually used for backup during workweek. In this case the restoration of this backup is not enough for the original state restoration. In case of server or disk array breakdown it is necessary to restore the last full backup first and then all Incremental backups chronologically from the oldest one till the newest one created at the time after the last full backup. This means that incremental backups are indeed faster to create but it takes more time to restore because of the necessity to restore number of backups.  Probability of a big breakdown is not that likely so you can definitely make the best account of the incremental backup.

If you choose the method of incremental or differential backup as an accessory to the full backup depends only on the environment of your company. In these cases it is better to have the analysis and policies proposals made by specialists so it is possible to avoid mistakes of badly designed backup policy, which can cause wrong invested resources into the storage.

Round Robin (scheme with one tape per each day)

We gain the simplest scheme of tape rotation by reservation of one tape for every day of workweek. Tapes are labelled (Monday, Tuesday, Wednesday, Thursday and Friday). Each day a full backup of data prepared for backup is made on the relevant tape. This rotation enables the data restoration with maximal time shift backwards – one week. The scheme is suitable for application in small companies with usage of internal or external tape drive or NAS device with created VDL (virtual disk library), which can serve as a primary storage. This solution is also suitable there, where it is possible to perform a full backup every day and the time shift of one week backwards is sufficient.

The method of ‘Grandfather-Father-Son’ backup scheme belongs to the most widely used schemes. This scheme uses daily (Son), weekly (Father) and monthly (Grandfather) medium sets. Four medium sets are titled everyday backup of workweek (i.e. Monday to Thursday). On these medium sets (titled as Son in the scheme of GFS) the incremental backups take place. These medium sets (Son) are repeatedly rewritten during the next week. Another group of five medium sets, which is included in the GFS scheme, are medium sets titled as Week 1, Week 2, and so on (Father). See the picture: 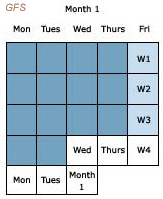 On these medium sets (Father) the full backups take place every week, the Son medium sets are not used and the expiration time of ‘Father’ group is one month. Then their rewriting follows. The final medium set ‘Grandfather’ consists of 3 medium sets (medium set may be composed of one or many tapes) and it is titled as ‘Month 1, Month 2, Month 3, and so on’. On these medium sets the follow-up rewriting takes place once per three months and more (depends on how many sets are devoted to ‘Grandfather’ group. The expiration of these sets (it is the possibility of another rewriting) is adjusted according to the number of medium sets in Grandfather Group. Each ‘medium set’ of tape groups (Son, Father or Grandfather) is either individual or a set of tapes. That is dependent on the size of backed-up data. The total number of used medium sets in the GFS backup scheme is twelve. By reason of tape wear and by reason of keeping a longer history (archiving) it is recommended to change the medium sets for new ones in a certain time period.

The scheme of Tower of Hanoi draws from a logical game, which has its origins in China. The objective of the game is to move five disks from one rod to another with minimal number of moves. Only one disk must be moved at a time and no disk may be placed on top of a smaller disk. It has been proven that the fewest number of moves is 31. The method of Tower of Hanoi uses five medium sets for backup:

The planning of Tower of Hanoi is following:

This scheme is quite difficult to administrate manually. Because of that it is highly recommended to use backup software with the option of scheduling of whole process (i.e. NetVault 7.1) and especially while using of tape autoloader (i.e. Tandberg, autoloader SLR140). Or to use a more suitable solution with more slots such as tape libraries (i.e. ADIC Scalar 24, ADIC Scalar 100) for sufficient number of medium sets involving tapes for backup, archiving and disaster recovery solution. As well as the Grandfather-Father-Son scheme the Tower of Hanoi enables to periodically take out the medium set with the view of archiving. 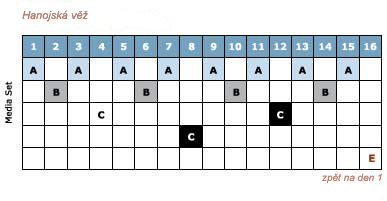 Nowadays backup trends bring usage of primary and secondary data storage to the backup schemes for higher safety. NAS (Network Attached Storage) works as a primary data storage in most of companies, where the workweek backups are performed on disks and then are made migrate into tape drives of tape libraries.

At the whole solution design it is good to start from the equations below for calculation of number of needed tapes enabling a safe backup, data archiving and Disaster recovery Solution. Next time we will talk about usage of primary storage built up on NAS devices (i.e. Iomega NAS p400/p800) and subsequent data migration into the secondary storage built up on a usage of backup schemes.

Calculation of number of tapes needed for backup including archiving and Disaster Recovery: